Professor Russ Haughey (above, bottom row, 4th from left) and I took students from his wildlife program and my lab to the Joint Annual Meetings of the AZ/NM Wildlife and Fisheries Society Meetings in Pinetop, AZ recently (Feb. 6-8, 2014). Two members of the lab presented results from our pika metapopulation work–Sabrina Jones (third from left, bottom row) and Andrew Nemecek (second from left, top row). (This work was done in collaboration with Andrew Smith at ASU and Easton White, now at University of Victoria, soon to move to UC Davis). This is the second year in a row we’ve presented at these meetings. 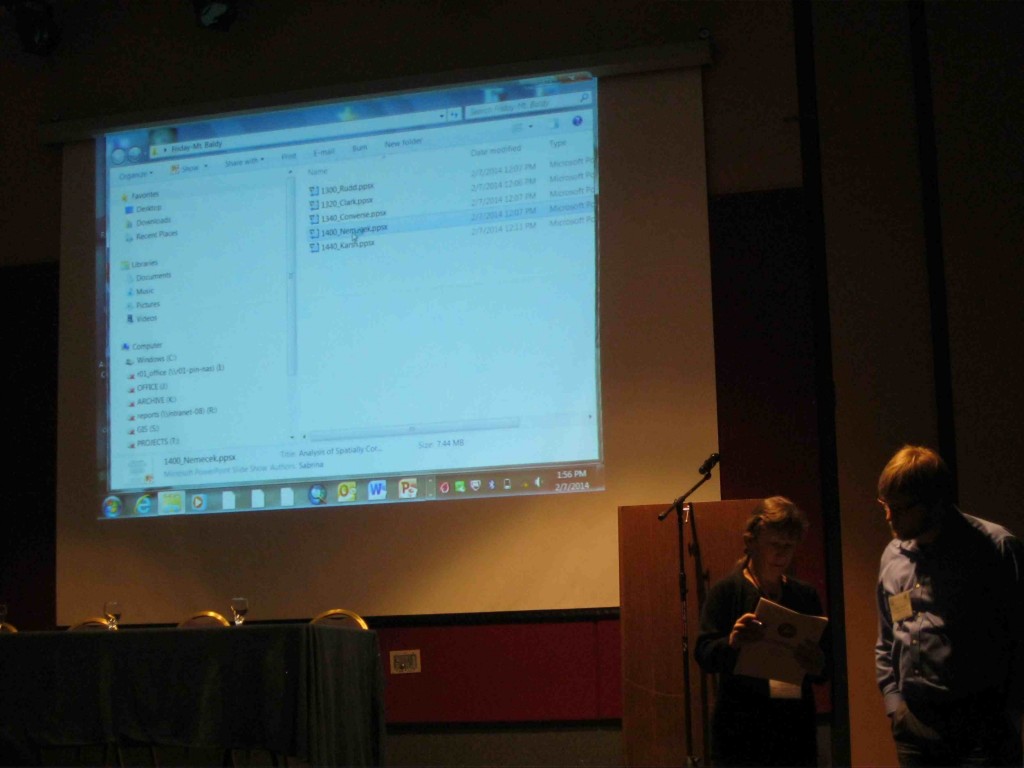 Andrew Nemeck preparing to give his talk.

Andrew Nemecek gave a talk focusing on our reevaluation of a paper by Michael Clinchy, Daniel Haydon and Andrew Smith published in 2002. In the 1970s, Andrew Smith began working on a population of pikas in the ghost mining town of Bodie, California. (I did my dissertation work there in the 1990s; Andrew was my major professor.) These animals, which are obligate talus-dwellers, live on ore dumps left by mining activity at the site in the late 19th Century. The ore dumps are small–most can hold no more than 6 pika territories, although some are considerably larger–and isolated from each other by Great Basin sage desert. How best to understand the dynamics of this population has been under debate. Andrew (Smith) originally interpreted it as a metapopulation–a set of subpopulations living on “islands” or “patches” (ore dumps) connected by dispersal. Clinchy et al. challenged this understanding. They suggested that data from 4 censuses could be explained best by a model in which patches undergo extinctions correlated in space; in other words, patches tend to go extinct in clumps. Correlated extinctions could be caused by a variety of events–a weasel hunting in a specific area, or an exceptionally deep snow drift that covers a collection of patches well into summer, for example.

In his talk, which presented results obtained in collaboration with Sabrina Jones, Andrew Smith and me, Andrew N. showed that the Clinchy interpretation does not conform to evidence from a long-term data set collected by Andrew Smith, Lyle Nichols and me at Bodie between 1991 and 2010. Over this time span, we performed an exhaustive census of the Bodie pika population nearly every year. These data show, first, that patches indeed go extinct, but they are also colonized at the same rate, which the Clinchy model cannot account for. Second, the pattern of patch isolation predicted by the Clinchy model is not evident in the long-term data. Instead, the evidence at hand is consistent with the interpretation of Bodie being a true metapopulation. 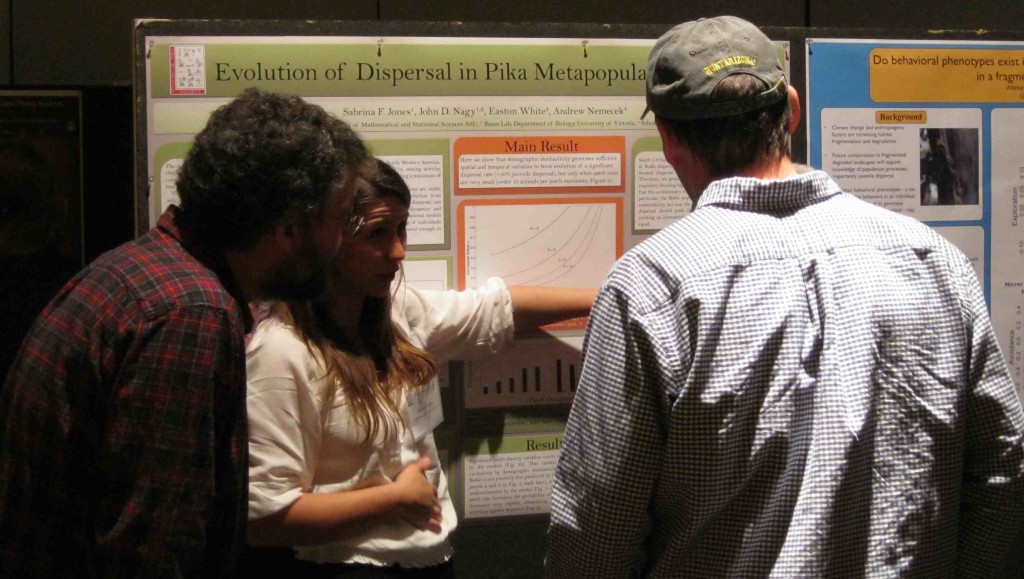 Sabrina Jones explains the finer points of her poster.

Sabrina presented joint work the two of us did with the same cast of characters: Andrew Smith, Easton White and Andrew Nemecek. Her poster addressed the question of how natural selection is acting on dispersal in the Bodie pikas, and is the latest result in a research thread that began with my dissertation in the mid-1990s.

Throughout their range, pikas seem to exhibit little tendency to disperse, even as juveniles. Although some evidence of long-range dispersal exists, on ecological timescales it is probably fairly rare. Pikas generally don’t treat each other very well, and juveniles that move tend to get harassed much more by strangers than by parents. So movement carries a cost. However, it offers little benefit. In mammals, dispersal appears to arise as a strategy to limit inbreeding or decrease competition for resources, including mates. But these benefits are realized only if there is variation in space or time in relatedness or access to resources. For example, if all animals are highly inbred, then moving doesn’t help–potential mates wherever you go are still genetically similar to your family. Or, if the habitat is saturated with other animals all the time, dispersal is useless because you’ll move and end up in the same situation you left. Throughout most of their range, pikas appear to experience both of these situations–they are genetically similar and tend to saturate their environments.

But not at Bodie. Here, the subpopulations in the metapopulation are  small, on the order of 10 at most, and often less than 10. So the patches go through repeated cycles of extinction and recolonization (as our 20-year data set shows without question). As a result, a significant fraction of patches harbor submaximal populations and many are just plain empty. The main cause appears to be demographic stochasticity, or in less fancy lingo random variations in births and deaths. Small populations have a high probability of going extinct simply because, by chance, they have a “bad year,” with few births and many deaths.

One question driving our research is, can demographic stochasticity generate sufficient spatial variation to promote dispersal? The answer is, without doubt, yes. Is dispersal promoted in this way at Bodie? We’re not sure yet, but the preliminary answer is, probably. We’re more sure that the selection pressure favoring dispersal is present, but we have less confidence that the data show the pikas responding to it. However, if there is little additive genetic variance in dispersal propensity (i.e., the probability of dispersal is not strongly genetic) evolution will be slow, so it might be difficult to see even in 20 year data sets. We have calculated the strength of selection and predicted the evolutionary endpoint–that is, the mean dispersal propensity that is evolutionarily attracting and unbeatable by mutant strategies. Interestingly, we also showed that, as the pika population evolves towards this endpoint, it should become less likely to go extinct from changes in its habitat. Dispersal is therefore predicted to evolve as a sort of “accidental adaptation” to environmental change. This was the gist of Sabrina’s poster.

Post Views: 279
This entry was posted in Dispersal. Bookmark the permalink.