Many paths lead to achievement. People regularly achieve greatness–as measured by wealth, influence and status–by the adroit use of self-promotion, its sibling, marketing, and the handmaiden to both, deceit. Bribery, coercion and other forms of persuasion have also led many to “greatness.” All such paths are controversial, exciting some and dismaying others. But all, when navigated by the proper type of person, are demonstrably effective. In this lab, however, we have no interest in wealth, influence or status. Instead, we focus exclusively on a goal we see as thoroughly laudable and significant—the deepest possible understanding of the universe. For us there exists only one possible route to success, the signpost to which is found on a NASA mission patch, of all places.

The National Aeronautics and Space Administration loves patches. As a NASA scientist once told me, “if you don’t have a patch, you don’t have a mission.” Even those who control missions have their own patch. The Mission Control patch was designed by the legendary flight director, Eugene (Gene) Kranz, and Robert McCall, one of the greatest American artists of the 20th Century (and who contributed much of the artwork adorning the Natural Sciences buildings at SCC). Mission Control is short for Mission Operations Control Room, or MOCR (pronounced “Mow-kur”). But it was much more than just a room. Here, flight control teams worked continuously with the astronauts to monitor the spacecraft and other mission hardware, solved problems and generally protected the lives of the flight crew while focused on success of the mission. Mission Control was, quite literally, an indispensable part of the only successful attempt in Earth’s history to set humans down on another world. And Gene Kranz was indispensable to Mission Control. He has been intimately involved in the flights of all U.S. crewed spacecraft. He was assistant flight director for Mercury, flight director (head of a MOCR team) for all Gemini and Apollo missions, promoted to Deputy Director and then Director of the Mission Operations Directorate during the Space Shuttle years, and finally retired after 34 years at NASA following the successful repair of the Hubble Space Telescope by the STS-61 crew (December 1993). Kranz knows something about achievement.

McCall credits Kranz for the design of the patch, saying he (McCall) did little more than make it easily reproducible. This is probably something of an understatement–those familiar with McCall’s work would recognize his hand even if they knew nothing of his role in making the emblem–but essentially all elements of the patch reflect Kranz’s leadership style. The patch is circular, with a “legacy ring” surrounding a central picture. The picture is anchored by the Earth at the bottom, from which rises a Saturn V rocket boosting an Apollo spacecraft on a jet of flame toward the moon and sun while a satellite orbits Earth below. The “Mission Control” identifier is overlain by the greek letter sigma (∑) representing teamwork (summing up). At the bottom of the “legacy ring” sit icons for Mercury, Gemini and Apollo, all crewed U.S. spacecraft up to that time. The top of the ring holds prominent the Latin phrase, res gesta par excellentiam [sic]–“achieve through excellence.”

The emblem has changed since then. NASA turns to Michael Okuda, a graphic designer largely responsible for look of the fictional technology in Star Trek movies and The Next Generation television shows, whenever it feels the need to update the patch. During these redesigns, the Apollo-Saturn stack has been replaced first by the shuttle and then by a stylized spacecraft that, according to one website, “represent[s] the growing variety of U.S. space vehicles in operation.” (This is, of course, disingenuous–NASA has no crewed spacecraft in operation, and they are not about to put a Russian rocket on a U.S. patch.) The stars were rearranged to represent U.S. astronauts who died in the Apollo 1, STS-51-L (Challenger) and STS-107 (Columbia) missions. “Mission Control” became “Mission Operations” and then “Flight Operations.” The sun was replaced by Mars, and then both Moon and Mars were deemphasized and shown as barely visible crescents. The orbiting satellite was replaced by the International Space Station and then by…something. The legacy ring has added Skylab, the shuttle, the Russian MIR space station and the ISS. But throughout all these alterations one thing never changed: the Latin inscription at the top (except for a slight grammatical correction).

There is a reason for that, extending beyond NASA flight operations. The NASA flight directors during the Apollo era were among the greatest leaders the world has ever produced. I am sure there are those who dismisses this statement as childish hyperbole, but they are wrong. Listen to the flight director’s audio loop during Glynn Lunney’s first shift following the Apollo 13 accident, and then consider the qualities of flight directors who helped achieve a goal so extraordinary that a significant fraction of subsequent generations refuse to believe it was really achieved. But it was. And because they were great leaders, those responsible have taught us how they did it because they realized that the lesson applies to anyone accepting the challenge of significant goals: res gesta per excellentiam. 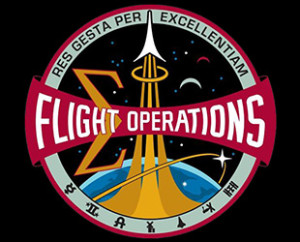 Excellence is also our path to achievement. It is the only one available to those of us compelled to study Nature honestly. But what does it mean, “achieve through excellence?” This is explained in the “Foundations of Mission Control,” published by Kranz in his book, “Failure is not an option” (Kranz 2000). Here are the foundations, slightly edited to fit our purpose:

To instill within ourselves these qualities essential for professional excellence:

Discipline. Being able to follow as well as lead, knowing that we must master ourselves before we can master our task.

Competence. There being no substitute for total preparation and complete dedication, for [Nature] will not tolerate the careless or indifferent.

Confidence. Believing in ourselves as well as others, knowing that we must master fear and hesitation before we can succeed.

Responsibility. Realizing that it cannot be shifted to others, for it belongs to each of us; we must answer for what we do, or fail to do.

Toughness. Taking a stand when we must; to try again, and again, even if it means following a more difficult path.

Teamwork. Respecting and utilizing the ability of others, realizing that we work toward a common goal, for success depends on the efforts of all.

…To recognize that the greatest error is not to have tried and failed, but that in trying, we did not give it our best effort.

This is what is meant by res gesta per excellentiam. This is our path, and we will do our utmost to remain on it at all times.