The United States’ move to privatize its human spaceflight program suffered another setback yesterday (June 28). The U.S. stopped operating crewed spacecraft in 2011 and now relies on  Russian Soyuz rockets and spacecraft to get U.S. astronauts into space. NASA’s current plans to resurrect its human spaceflight program include 3 spacecraft. The first is NASA’s own Orion spacecraft, which recently passed a reentry test with flying colors, stacked atop the planned Space Launch System. The other two are private efforts: Space Exploration Technology’s (SpaceX’s) Dragon capsule to be flown on its own Falcon booster, and Boeing’s Crew Space Transportation (CST) spacecraft flying on United Launch Aliance’s Atlas V rocket. 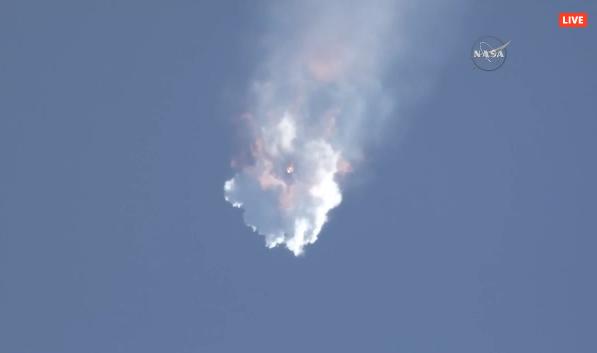 Screen capture of SpaceX’s Falcon 9 launched on June 28, 2015, shortly after the apparent explosion in its upper stage, possibly its oxidizer (liquid oxygen) tank.

Yesterday one of SpaceX’s Falcons exploded less then 3 minutes after liftoff. Everything looked good past the 2 minute mark, and the vehicle seemed to negotiate max Q (the maximum dynamic pressure) without a problem. Then, not long after reaching 32 km altitude (13 km downrange) and about 20 seconds before staging, the booster disintegrated. According to SpaceX, the cause was “counterintuitive,” whatever that means, but probably occurred in the upper stage. In a NASA briefing, SpaceX’s President and Chief Operating Officer Gwynne Shotwell suggested that the oxidizer tank (LOX) in the upper stage over-pressurized for some reason. That conclusion seems to fit what one sees in the video. It looks as if the explosion began in the upper half of the stack, with the first-stage engines apparently running normally until well after the explosion. At any rate, the problem does not appear to be in any of the Merlin engines (which like the Saturn V’s F-1 engines burn kerosine fuel with oxygen oxidizer), of which there are 9 in the lower stage and 1 in the upper.

So far, Falcon has been a reliable booster. The Merlin engine is very efficient, and SpaceX has adopted a proven Russian design concept, clustering a large number (in this case 9) motors in the lowest stage so that if 1 or 2 fail the booster can still perform its mission.

Rockets will always be dangerous, dynamic things. But this is the third failure in three consecutive attempts to resupply the ISS, using three different launch vehicles. The failures include the Antares rocket that exploded on the pad in October, a Russian Soyuz rocket that was lost at orbital insertion and now this. The ISS crew is fine–they have plenty of provisions because mission designers plan for launch problems. But given that Falcon is currently being rated to carry astronauts, this failure has implications beyond reprovisioning the ISS.  Although NASA expresses confidence in SpaceX and its decision to privatize human spaceflight in the U.S., this is a worrisome development. Unlike the Russians, the U.S. has failed to sustain a hardware program for human spaceflight. The success of the U.S.’s return to spaceflight may depend on this Falcon booster.

Post Views: 441
This entry was posted in Space News. Bookmark the permalink.